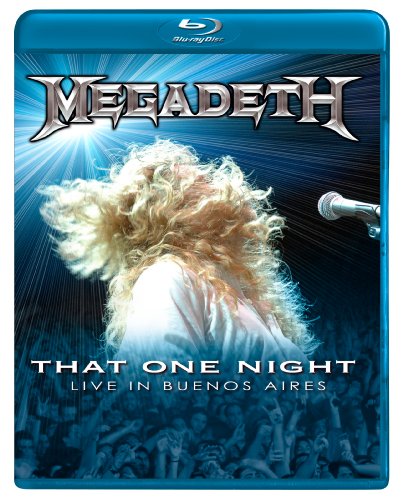 Megadeth: That One Night: Live in Buenos Aires [Blu-ray]

Filmed live at Obras Stadium, Buenos Aires, Argentina, on October 9, 2005. Megadeth is one of the most commercially successful heavy metal bands, selling more than 20 million albums worldwide, including the Grammy nominated multi-platinum Countdown to Extinction. In the U.S. alone, Megadeth have received four platinum records, six gold records, and seven Grammy nominations for Best Metal Performance. Songs: Blackmail the Universe, Set the World Afire, Wake Up Dead, In My Darkest Hour, She Wolf, Reckoning Day, A Tout Le Monde, Hangar 18, I'll Be There, Tornado of Souls, Trust, Something That I'm Not, Kick the Chair, Coming Home, Symphony of Destruction, Peace Sells and Symphony of Destruction (Alternate Version)
Show More
Reviews

Megadeth: That One Night: Live in Buenos Aires [Blu-ray]

Disclaimer: The price shown above includes all applicable taxes and fees. The information provided above is for reference purposes only. Products may go out of stock and delivery estimates may change at any time. Desertcart does not validate any claims made in the product descriptions above. For additional information, please contact the manufacturer or desertcart customer service. While desertcart makes reasonable efforts to only show products available in your country, some items may be cancelled if they are prohibited for import in Netherlands. For more details, please visit our Support Page.